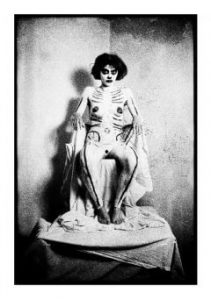 „There’s quite a bit of cross-dressing, body paint and slap throughout the show: Warhol as Marilyn, Zsuzsanna Ujj painting a skeleton on her own skin. Paint can be like mud or faeces, and it can be delicate as makeup; it can adorn or besmirch, beautify or degrade.” (Adrian Searle, The Guardian)

“Cindy Sherman became the most successful exponent, represented here by her early facial photos. One could have done with more. So is the Hungarian Zsuzsanna Ujj, with a striking self-portrait as a painted and defiant skeleton, and Lynn Hershman, with her narrative pictures of woman as an artificial construct in Roberta Construction Chart #1.” (Adrian Hamilton, Independent)In pictures.

„Since the 1980s Ujj has worked with performance and poetry to critique cultural constructions of female sexuality. Emerging from a situation in Hungary where most art institutions were state controlled, and being self-taught, Ujj turned to her own body as the basis of her work, painting and photographing it in anonymous settings to appear abstracted and distorted.

In Untitled 1986, a series of black and white photographs taken over four days, Ujj, alone, in an anonymous space, adopts a number of disquieting poses: her naked body, crudely painted to resemble a skeleton, transforms the traditionally passive female nude into a site of physical conflict. As she gazes menacingly beyond the picture’s frame, the viewer is directly inplicated as a voyeur of a scene that oscillates between vulnerability and violence. This image of primitive ritual overturns alluring images of women.” (A Place Called Space)

Zsuzsanna as poet, performer and singer

Zsuzsi Ujj is a unique artist in the Hungarian underground music and art scene. Twenty-five years after her first exhibition was held at the Liget Gallery, she presents her third solo show at the MissionArt Gallery. As only a narrow circle of friends and professionals have been familiar with her visual art activities, these works will no doubt come as a surprise to the audience. Zsuzsi Ujj’s output in the visual arts has been recently re-discovered outside her homeland, as well: they were presented at the comprehensive exhibition, Gender Check, at MUMOK Vienna in 2009, and a few selected pieces will be featured in autumn this year in ABigger Splash: Painting after Performance, at the Tate Modern London, side by side the works of Jackson Pollock, David Hockney and Cindy Sherman, among others. In Zsuzsi Ujj’s oeuvre, visual arts, music, written texts and poetry are present synchronously, often intertwined. The visual world and message of her early performance photos, mostly made in the 1980s, are not illustrations to her contemporary poems and texts, but engender an equally powerful, independent world. The notion of women art, which has become acknowledged and even fashionable by today, emerged in Hungary concurrently with her visual art activities, but it differed from the conceptual and theoretical artistic approach of today. Zsuzsi Ujj’s works were born in “full freedom”, without hindrances and inhibitions, yet not through a spontaneous or instinctive artistic process. They touch upon the core and depth of (human and womanly) existence in sensuous ways that often seem to be brutal, or they employ metaphorical means. Her early performances and photographic works related to or documenting them are as succinct and powerful as her poems are, whose poetic language is far from recondite lyricism. Words that would count as obscene in everyday life function naturally in her poems and songs abounding with dramatic moments (just like her large-sized photos recording her performances).

In the field of visual arts, Zsuzsi Ujj limited herself to black-and-white, usually large-sized photographs, besides moving images. In 1992 she abandoned these activities to write poetry, lyrics, or texts not meant for the public eye. As singer and songwriter of the Csókolom band, she published her recordings of music in 1994, 1995, 2000 and 2006. A volume of Zsuzsi Ujj’s collected poems and lyrics is to appear concurrently with the exhibition, published by the MissionArt Gallery. (Zsolt Kishonthy)